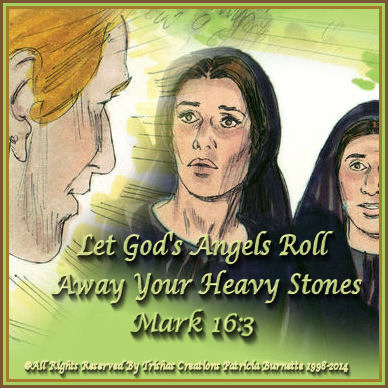 Knowing the glorious miracle of Easter and the joy it inspires in the hearts of all who love the Lord, it’s hard to believe that the day we celebrate actually began–some two thousand years ago–in dejection and sorrow.

The women closest to Jesus, still numb and heavy-hearted from the horror of the crucifixion, walked out together to the sepulcher where He was buried. They wanted to anoint His lifeless body, as was the custom, and they were extremely depressed and worried. They knew the entrance to the tomb had been blocked by a mammoth boulder that they were not strong enough to move. “And they said among themselves, Who shall roll us away the stone from the door of the sepulcher?” (Mark 16:3).

What happened next is another of the wonders of Easter. When they arrived, they discovered that the heavy stone had been rolled away by one of God’s angels!

They were saved from having to perform their sorrowful ritual, because Jesus’ body was gone. The angel informed them that their Lord had risen! Picture the sorrow and hurt and fear rolling away from those women’s hearts, just like the heavy stone was rolled away!

All of us have had times in our lives when we felt the way those women did that morning. Illness, financial worries, the death of a loved one, or heartbreak can lock us in a tomb of total depression. The weight of these burdens can become so heavy that it seems there is no way out.

Well, I have good news: you were never meant to handle your problems alone! That’s why God has ministering angels. He has charged them specifically to help you. “For he shall give his angels charge over thee, to keep thee in all thy ways. They shall bear thee up in their hands, lest thou dash thy foot against a stone” (Psalms 91:11-12).

How do you activate angels to help you? David tells us in Psalms 103:20 that angels hearken “unto the voice of his word.” If we are to have angels working on our behalf, we must speak God’s Word to them. They don’t move at our words; they move upon the Word!

If you want angels to be active in your life, you must be a person of prayer and a person who gives. The apostle Peter knew just such a person. His name was Cornelius and you can read his story in the book of Acts, where he is described as “A devout man, and one that feared God with all his house, which gave much alms to the people, and prayed to God alway” (Acts 10:2).

Cornelius had a heart that was turned totally toward God. As a result, he had an angelic visitation:

He saw in a vision evidently about the ninth hour of the day an angel of God coming in to him, and saying unto him, Cornelius. And when he looked on him, he was afraid, and said, What is it, Lord? And he said unto him, Thy prayers and thine alms are come up for a memorial before God (Acts 10:3,4).

Do you realize what the angel told Cornelius? A memorial is something that is built to last forever to remind those looking at it of the person who built it or of the one to whom it is dedicated. How wonderful to think that our prayers and our giving remain forever in God’s sight–an eternal memorial that keeps us foremost in His thoughts and care. Our own prayers and willingness to give are the “magnets” which draw God’s special attention and cause Him to send angels to our assistance when we need them.

Angels are not just there for “special people,” but for everyone in the household of faith. God has helped me roll away “heavy stones” of depression, grief, and fear through the ministry of angels … and the Lord can do the same for you!