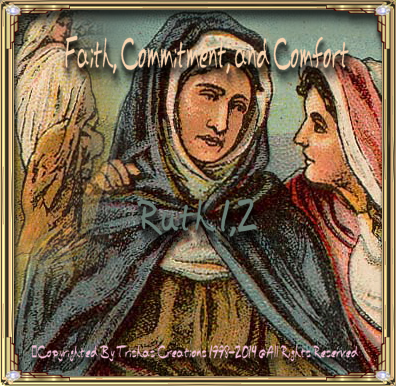 After Naomi lost her husband and her sins, she did not have anything to offer them, she was elderly she had no money. She tried to get her daughter-in-laws to leave her and return to their own land, Orpah did, but Ruth she stayed with Naomi.

Ruth, she had faith, she knew unless there was some divine intervention her future looked pretty dim. But, she chose to be faithful to her mother-in-law Naomi, and serve her God. Ruth 1:16,17

Many people, even in today’s times they will choose their comforts over hearing of any type of commitments and using their faith.

What they are not and don’t realize is when they act this way they loose completely out, and they end up missing out on the blessings and rewards of being Committed and faithful.

Ruth, she didn’t know what all her future held for her, but God did, and she was very bit and determined she was going to be a woman who wanted to serve God, and she wanted to continue to be by Naomi’s side.

God, was always there making special arrangements to bless them. Naomi, she had a relative named, Boaz which was very wealthy and he was a single man, and Boaz and Ruth married. Ruth 4:10

Faithfulness, led Ruth from her poverty into the abundance of God. Proverbs 28:20 says, that a faithful person will “abound with blessings.” Being faithful means: “we all have to endure some difficulty in our lives along the way, we will always endure some problems of some kind, but as long as we have faith, it makes us stronger and as long as we wait patiently for the Lord, we will see His Salvation and His Abundance in all our Circumstances.”

So, it’s comfort, Commitment and Faith which is your’s, I hope you don’t choose Comfort, because you will continue to loose out on ALL GOD wants for YOU and you will always live in lack in every direction you turn so, what do you choose?