Is Sacrifice Better Than Obedience 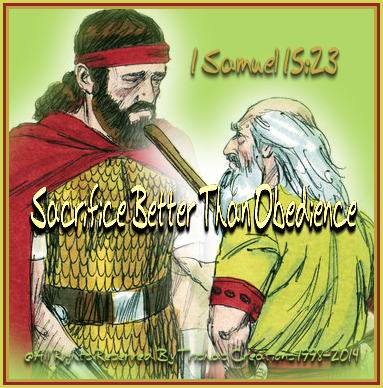 Is Sacrifice Better Than Obedience
1 Samuel 15:23

This is a simple and very quick answer NO! I all these years, because again I thought by always being there for my family and I had to get done, members to my websites, and other websites I own and owned, I still needed help, etc. I thought I was to be this way, just drop all I needed to do and get done, and do it, I ended up sacrificing so much which again I thought this was what I was to do and be like.

I wanted to be there for my family and have been for so many years, because I loved them so much and I still do and always will.

All I tried so hard to build up and do and I actually thought this was how I was to be more like Christ in order to do His will. But, in reality I wasn’t being obedient at all as far as what Joyce Meyers Bible shows in her life points.

If, I had it all to do over again, I sure would because, by letting go of what I was to be doing I wasn’t really doing what God wanted me to do, He gave me talents to do certain things with and I tried so hard to be a good daughter and sister, wife, mother and aunt and niece etc. But, really was I?

There are some in my family which can be very demanding, so yes I even did it because I cannot handle trouble or havoc and I do most things most of the time to keep that trouble down. I have always been a person of peace and love and trouble is one of those things I cannot stand.

Obedience, is way more important than, a sacrifice because Obedience, you are always obeying.

Rebellion, is like witchcraft, the Lord made that clear in 1 Samuel 15:23.

We all seem to think our own ideas of sacrifice is better than the Obedience, in which we are to give God, but He calls this attitude, stubbornness, and says it is equivalent to Idolatry, why?

Because, we are idolizing our own ideas, our own theories, holding the high above God’s Commands.

Remember, reading about Saul when he lost his opportunity when he wanted and God wanted him to be king?

When, God wants us to do something He requires, complete Obedience, and He should be like that, and He will not accept any less, why should He?

Just like me, I actually thought for over 33 years I was being obedient because of always being there for my family and no matter what I had to stop doing or give up, I thought I was doing what God wanted me to do and that was to always put family first and be there for them. To do and be all I could possibly be, but what I ended up being, is sick all the time and always giving and not giving the part of me to God like I was to be doing.

I was always trying to be the problem and trouble solver, the peace-maker, but I was so consumed in trying to make peace between those in my family, I ended up being less of what I was to be for God and giving Him the Obedience He deserved.

As, I mentioned being there for my family was important to me. I thought I was being obedient but, I was sacrificing what I should’ve let God handle and do. I was to be, more obedient in other things He wanted me to be doing. Some things are easy to do, but there are things which may seem hard, but unless we let God take control of things which we have no business trying to do on our own, we must let God handle it and do what He wants us to do for Him and in Obedience.

Being less Obedient to Him we will end up loosing what God prepared for us, if we do not give Him the Obedience.